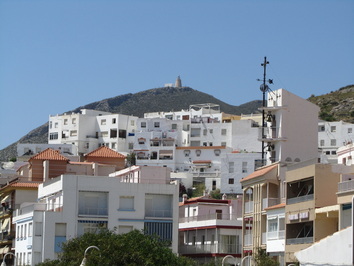 Castell De Ferro is a lovely, typically Spanish fishing village, with all the modern conveniences you would need whilst on holiday; local restaurants, cafes and bars all serving fresh, local produce, internet cafes, shops, super-markets, fishmongers and panaderia (bakers).  A local market is held every Saturday.

During the summer months, Castell De Ferro is host to volley ball competitions, an open-air cinema and during the evening, the promenade is busy with stall holders selling their wares. 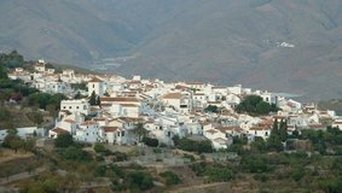 The small village of Gualchos is situated at 1,200 feet in a natural enclave above Castell De Ferro.  It is encircled behind, to the north and west, by the Lújar and Sierra Nevada mountain ranges and overlooks the Mediterranean Sea to the south.  It is one of the many small, whitewashed Andalucian (Andalus) villages scattered throughout the mountains of southern Spain wherever there is a natural spring; villages which have changed little in their way of life since the middle ages.
Scuba Diving
The water temperature varies throughout the year, from 14 º to 28 º. The average is around 22 degrees in summer and 17 degrees in winter. The season extends activities throughout the year with no winter break forced on the majority of dive destinations. Even with rough seas, there are a whole series of protected bays that allow continuous diving. Dardanus diving school, Calahonda, offers courses from beginner to expert. Tel Office 958 624 381 or (m) 669 146702

Fishing
Escorted fishing trips and all equipment necessary for sea fishing is available at Deportes Castro, Castell de Ferro. The fishing club of Castell holds its annual overnight beach casting competition during early July. They fish from 9pm to 9am and then wash up in the local bar for weigh in, breakfast and prize giving. There were 52 competitors in 2010. Phone:      (0034) 958 830 255

Nerja Caves
A trip to Andalucía would not be complete without a visit to the Nerja Caves, one of Spain’s most popular and spectacular historical sites. Every June there is a Festival of Music and Dance held in the auditorium in the first cave which provides a magical backdrop to ballet, classical music and singing. Top names perform and the seating is limited so enquire about tickets well in advance.

Salobrena Castle
The castle of Salobreña was built by the Moors during an occupation period and later was passed to the Christians. It is an authentic historical relic that is set on top of Salobreña. In 1949 it was declared a Heritage monument by the UNESCO. There is a museum including interesting photographs of the history of the area. You will not need a map to find your way around Salobreña just look for the Moorish Castle and the church of the Señora del Rosario which sit high at the top of the village. The views are spectacular and well worth a visit. Both the Castle and the museum are open to the public daily. For further information call the Tourist Information office in Salobreña on 0034 958 610 314 or the museum in Salobreña on 0034 958 612 733.

The Alhambra and Granada
The Alhambra Palace is set against the magnificent backdrop of the Sierra Nevada Mountains and its name originates from Arabic roots meaning red or crimson castle. It is very easy to find by car. Take the Granada road (fast motorway) from Motril. At Granada look for ”Ronda Sur” (the city's ring road), following the direction of Sierra Nevada and then the signposts for the Alhambra. You may leave your car at one of the two car parks in the Generalife while visiting the Alhambra. There are many bars and restaurants near the car parks where you can find refreshment, or you can walk down the hill to the modern city and explore the beautiful Christian monuments, including the Cathedral and resting place of the Catholic Monarchs who re took Granada from the moors, Fernando and Isabella.

Visitor numbers are limited. You can buy tickets at the gate on the day, however it is strongly recommended to buy your tickets in advance.
www.alhambra-patronato.es

Aquarium in Almunecar
The largest Aquarium in the whole of Andalucía
For more information, opening times and local please visit their website
www.acuarioalmunecar.es

Walking
Castell de Ferro provides the ideal base, for those who enjoy walking, from which to explore the Sierra Lújar. Following paths out along the ridge from the village of Lujar, you can take in breathtaking views of the Sierra Nevada on one side, and the deep blue Mediterranean Sea on the other. You will find yourself stopping to take in the calm silence. Herds of wild mountain goat cross the trail and butterflies dance amongst the wild flowers. Eagles can be seen as you near the summit, 5,800 feet above sea level. From the top of Sierra Lújar it is said that you can see Morocco on a clear day.

Cyclist
For Mountain Biking enthusiasts, the trails and descents in this area have been described as 'some of the best mountain biking trails in the world' by Guy Kesteven, Technical Editor of What Mountain Bike. The area boasts well over 20 named mountain bike trails within a fifteen-kilometer radius of Castell de Ferro.Late February is the start of the cycling season in Granada, specifically the Castell de Ferro to Rubite hill climb proves short but intense, open to any participant, and rises 14.61 km. Residents of both villages come together to organise the race and at the finish line provide the ham and local wine and a welcome in the hillside. Another nearby village, Polopos, has its own hill climb event in February with their “Fiesta del Vino” when a thousand visitors turn up for tapas, wine and dancing to live music in the Plaza after the bike race from the coast to Haza del Lino; 20 kms of serious mountain road!

Bird Watching
Andalucia offers some of Spain's most spectacular birdlife. Magnificent Golden and Bonelli´s Eagles are joined by large numbers of Booted and Short-toed Eagles as they return from their wintering grounds in Africa in the spring. Migrant Lesser Kestrels too breed locally and Egyptian Vultures visit early in the year, and towards the end of summer spectacular Griffon Vultures can be found soaring over the hillsides. Southern Grey Shrikes and Hoopoes can be seen all year, with migrant Woodchat Shrikes and beautiful Golden Orioles nesting each year near to Lanjaron. Noisy flocks of Bee Eaters add a tropical splash of color throughout the season and with Blue Rock Thrush, Rock Thrush, Black Wheatear and Black-eared Wheatear all seen regularly in the Sierra, here is some of the best bird watching in Europe.

Skiing
The Sierra Nevada ski resort has numerous runs of varying difficulties to satisfy all levels of skiers. Natural snow is supplemented by snow cannons on some runs, and many skiers are pleasantly surprised to find that, because of its southerly position, the air temperature is usually warmer than other resorts.

For further information on Spain 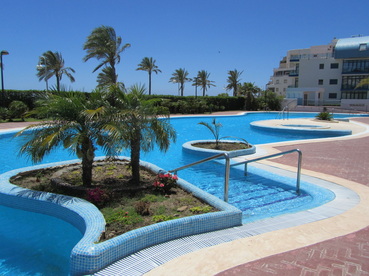